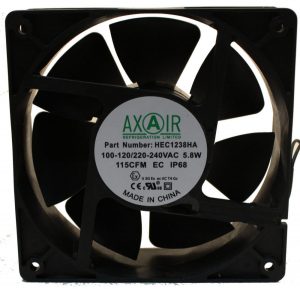 When Axair Refrigeration launched their ATEX compact axial fans to the market it was the only one of its kind as it was EC and IP68. This stands in one of our great innovations as a company.

ATEX is an acronym for “atmospheres explosbiles”, also known as explosion proof. ATEX fans has grown in the marketplace since the ATEX directive came into place in 2003. As of 20th April 2016, the new Directive ATEX 2014-34 EU superseded the previous ATEX 94/9/EC Directive which became legally effective on 1 July 2003. The directive states that manufacturing standards must meet a certain level of safety. This is too protect people against the risk that may be caused by dangerous or explosive substances. An application must have an ATEX explosion proof fan if there are combustible, flammable gases or dust present at any time in the airstream.

In a commercial refrigeration application ATEX compact axial fans are essential. Hydrocarbon (HC) refrigerants are still very popular in the market place as they are readily available, cost effective and more environmentally friendly than the previously used HFC refrigerants. HC refrigerants have a high explosion and flammability risk meaning that if the refrigerant where to leak and the fan where to spark there could potentially end up with harmful consequences. By using an ATEX fan no spark can be produced therefore guaranteeing no risk of harmful consequences.

The Compact axial fan is not only ATEX but EC and IP68. An ingress protection (IP) rating of 68 means that the compact axial fan is 100% dust tight and 100% protected against submersion in water. IP68 is the highest possible rating.

EC (electronically commutated) fans has risen in popularity due to the fact they are more energy efficient and more controllable. EC uses the best of both worlds by combining AC and DC voltages. It is said that using an EC fan can save up to 80% on its AC counterpart